Rome, the capital city of Italy, is, without doubt, one of the most enchanting towns where you will discover a romantic blend of history and culture. The city’s history spans 28 centuries, making Rome a continuously occupied city in Europe. The influences of Roman civilization are still seen in today’s practices. The engineering expertise of Romans can be seen in today’s sewage planning, drinking water supply, construction of aqueducts, and many more. Hence Rome is also called Caput Mundi (Capital of World). One more interesting fact about Rome is that this city has a country inside its boundaries, the Vatican City.

Rome is well known for its stunning architectures, landscapes, and beautiful churches. Apart from the famous Colosseum or St Peter’s Square and Basilica, this city has a vibrant street food culture. Rome has introduced various cuisines to the world, a renowned chef named Bartolomeo Scappi who worked for Pope Pius IV, has listed approximately 1000 cuisines in his book. The street food concept in Rome is not new, where stalls selling snacks at reasonable prices populated across the city more than 2000 years ago. The same has been continued until today, and in fact, the concept of street food has boomed, and new food formats have emerged to provide an array of quick bites at affordable pricing.

This is considered as the king of Roman street food. These are the Silican fried rice balls that have a Roman twist in them. Traditional suppli is the deep-fried rice croquettes that are made of rice filled with ragu, a meat sauce, and mozzarella. Vegetarian options are also available for the fillings. These are found at many pizza kiosks around the city. 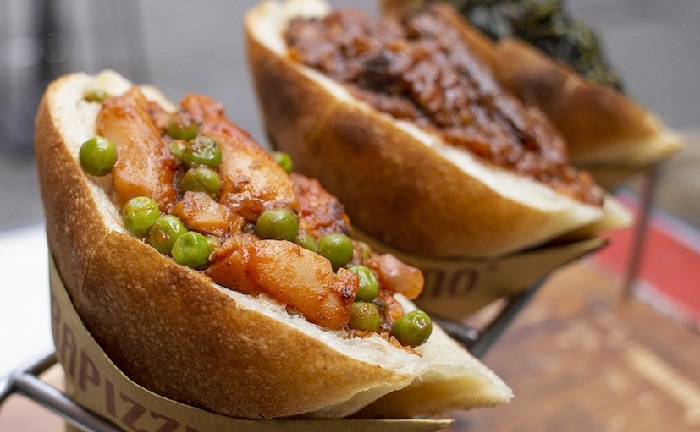 Trapizzino is a blend of traditional Roman flavors with a twist of modern food. This consists of meatballs, and the Roman classics such as Pollo alla cacciatore (chicken in tomato sauce), malazzane alla parmigiana (baked eggplant with caciocavallo cheese), and salsa verda (parsley pesto) sandwiched between a triangular pocket of pizza dough. This came to the streets in 2020 and has become such popular that it has spread its wings all over the world in the next five years. 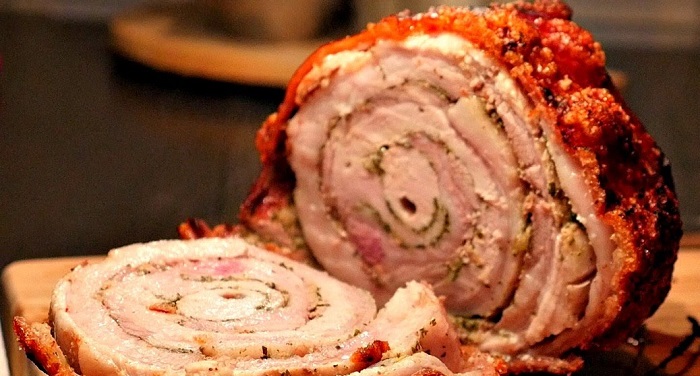 This is a pork sandwich that is an authentic dish of Ariccia, a town close to Rome, but has become quite popular on the streets of Rome. Porchetta is a slice of fatty pork, with layers of stuffing, skin and fat deboned, rolled and roasted on a low flame to maintain the moisture and maximize the flavor. This roasted pork is sandwiched between soft, fresh and crusty bread and served generously with cheese and butter over it. This can be best enjoyed for lunch.

It is no doubt that Romans like Pizza, and in this city, pizza appears in a variety of forms. The most commonly found is pizza al taglio (pizza by the slice). The pizza dough is placed in rectangular cast-iron pans, baked, and topped. These box-shaped slices are reheated when ordered. These are available in two forms pizza tonda (round pizza) and pizza al taglio (sliced pizza). The choice of toppings varies from pure vegetarian to non-vegetarian slices. This is a perfect snack for those who are on the move, and this is available till midnight. 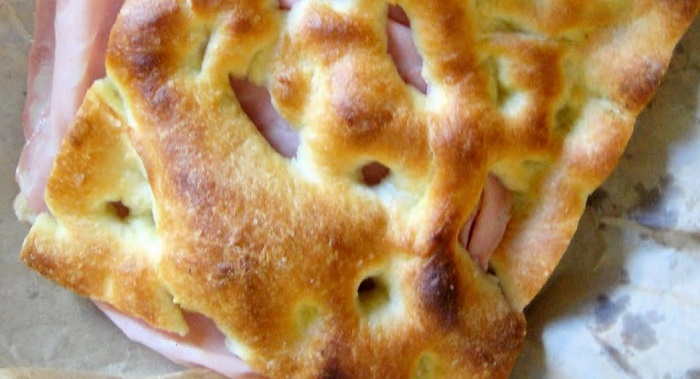 Pizza Co La Mortaza is essentially a sandwich that originated from an Italian city of Bologna gradually became popular on the streets of Rome and considered as the classic snack of Rome. A local flat-bread is cut open and stuffed with a few thin slices of mortadella. This snack is best enjoyed when the pizza Bianca is right out of the oven, and the mortadella melts into the steaming bread. 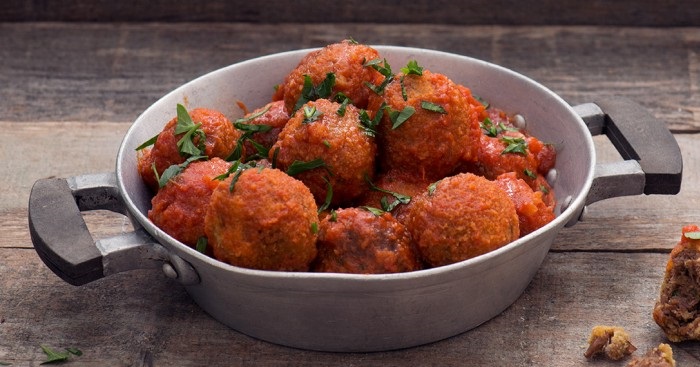 This snack has emerged in Rome as a way to use the leftovers of meat scraps. The leftover meat is bound with the egg and breadcrumbs, and small spheres are made. These patties are breaded and deep-fried and served with toppings of some herbs and accompanied by traditional Italian sauce. These are the snacks that can be enjoyed during the leisure evenings.

Pinsa is the Roman name for pizza that has the roots of Ancient Rome. The dough is made from a mixture of rice, wheat, and soya flavors. An adequate amount of water is added to this mixture to digest easily. The main difference between the regular pizza and Pinsa is that of the shape, Pinsa is more of the elongated oval shape. Pinsa has become a revelation on the streets of Rome because of its delicious taste and easily digestible nature. 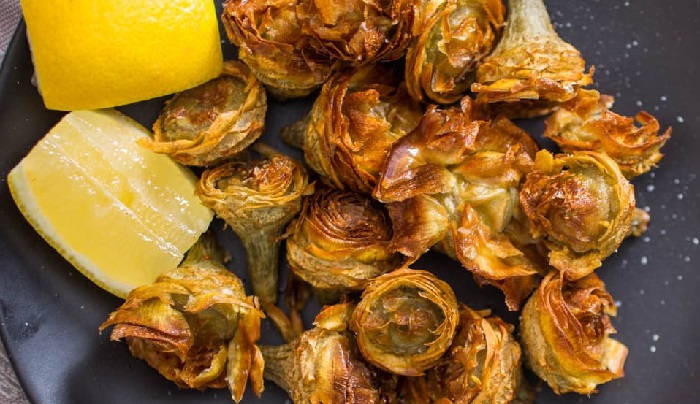 This is an ancient dish that dates back at least 500 years. This was confined to Roman-Jewish ghetto, but today this is ruling the food streets of Rome. This consists of artichokes that are flattened and deep-fried. The crispy outer leaves of the fried artichokes remind you of the crispy potato chips. If you are on a busy tour around the city, pack these fried artichokes and enjoy these delicacies. 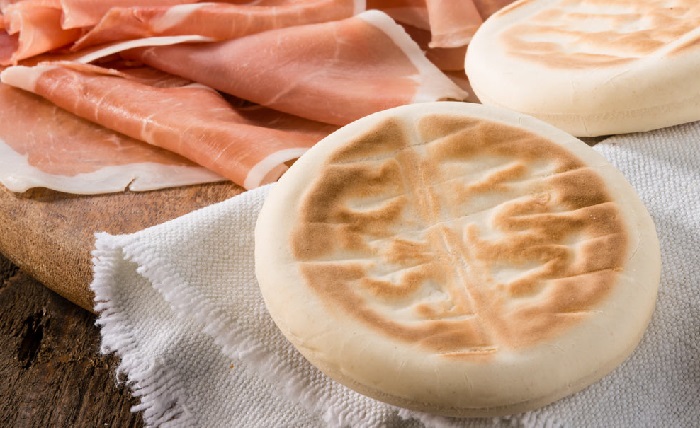 This sweet snack is a crossbreed between an English muffin and a pancake. The pancake is split open and stuffed with delicious tasty fillings. This Tigelle is crunchy on the outside and warm and soft within. This can be best enjoyed while wandering around the tourist places in Rome. 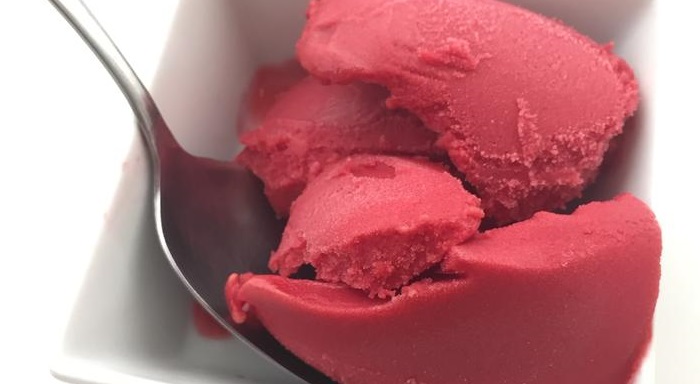 Rome’s Gelato and Sorbetto are perhaps the affordable gourmet snack abundantly available on the streets of Rome. Gelato is the Italian version of ice-cream, which involves higher milk content, no eggs, and less air. It is said that a local chain Fatamorgana offers around 200 flavors of Gelato round the year. Some of them are black cherry, rosemary honey, lemon, white peach, and many more. If you are in Rome, it will be a sin if you miss Gelato and Sorbetto in Rome.

Nothing can satisfy the cravings of the local cuisine than the street food of that place. Rome is an ancient city that has a variety of cuisines embedded in its culture. You cannot find the authentic taste in luxurious restaurants but can be found on the streets of the city. If you want your taste buds to be tickled with the Roman flavor, grab the bites of the above-mentioned street foods. The mentioned foods can fill your stomach for breakfast, lunch, evening snack, dinner, and even dessert. When you are back from Rome, do share your food experience with us. 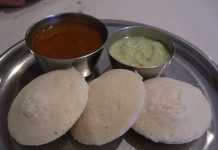 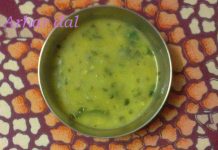 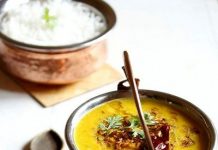 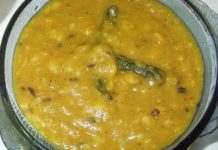 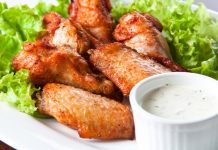